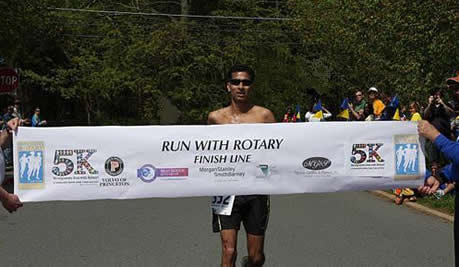 The Rotary Club of Montgomery Rocky Hill is pleased to announce the RUN WITH ROTARY (a 5K Road Race/walk) and 1 mile Ramble/Fun walk for 2016.. The event will take place on Sunday, April 24, 2016, at Skillman Park (Main Blvd. Skillman, NJ 08558) for the second year.   Entrance to the park is either from County Rt. 601 or Burnt Hill Road, Skillman, NJ (Montgomery Township).  The ramble/walk will begin at 10:00 AM, followed by the 5K Road Race/walk at 10:35 AM. Proceeds will benefit the Rotary Club of Montgomery Rocky Hill Foundation, a 501(c)(3) a not for profit organization that is involved in local, national, and international charitable activities such as providing support for the Montgomery Township Food Pantry and programs spearheaded by Rotary International for the eradication of polio and provision of relief to victims of natural disasters through the ShelterBox Program. A full list of our club’s charitable activities is provided below.

Formerly known as the “Run with Aimee” this wonderful race was first held in 1997. After ten successful years, the founding family decided to end its participation in the race. The Rotary Club of Montgomery Rocky Hill, at the urging of the Montgomery Township Recreation Department, volunteered to maintain this important community activity. CLICK HERE to visit the Run with Aimee website.

The RUN WITH ROTARY is presented this year by Mason Griffin & Pierson, Princeton Orthopaedic Associates, and  Morgan Stanley Smith Barney. Their thoughtful and generous donations represent a powerful commitment to this charitable community event. We continue to recruit Sponsors for 2015. If you are interested fill out the pledge form below, or contact us at race_information@runwithrotary.org.

We are happy to have Gibraltar Rock, and Land Trust Studios join us this year as Gold Sponsors.

For a full list of Sponsors, including Gold Level, Silver Level and Bronze Level Sponsors, CLICK HERE. Potential Sponsors are invited to CLICK HERE or contact us at race_information@runwithrotary.org for Sponsor information. Art Martin of the Race Committee note, “All calls, for all levels of Sponsorship, are welcomed and promptly returned.”

The Twentieth Year … And Beyond!

Once again we will hold the
Team Challenge in 2016!!

NewJersey Grand Prix” event. The NB Grand Prix is a prestigious series of races of various lengths held throughout New Jersey. Grand Prix events are selected by the New Jersey Section of the USA Track and Field organization (USATF-NJ) and are based on strict criteria. Events attract top quality runners from throughout the state as well as local athletes. Runners do not need to compete in the Grand Prix to enter. Participants at all levels are welcome and many recreational runners enjoy the 5K distance. First-time participants are especially encouraged to join in this race, which continues to be a classic spring event on the Race Calendar of serious and recreational Central New Jersey runners and walkers.

The RUN WITH ROTARY 5K course has been certified in length and is officially sanctioned by the USATF-NJ Certification # NJ12013LMB. This certification also means that the Race results can be registered for state and national 5K records, should any be set. The 5K follows a loop route, mostly flat, with one small hill in the second mile. The last mile is gradually down hill with a flat finish. Water is available at the start/finish and at the two mile mark. The 5K route is “walker-friendly,” meaning that all types of walkers including race-walkers are welcomed.

For the complete 5K course description and a map, CLICK HERE.

Walkers are welcome and encouraged to participate in the 5K.

The 1 mile Ramble/Fun walk is for all ages and all abilities. It provides an excellent opportunity to get some exercise while participating in a worthwhile community event for a good cause. The organizers expect serious runners, not-so-serious runners, walkers, and all types of “ramblers” to enjoy spring time weather on the flat course through the beautiful scenery of  Skillman Park. The original landscape and lay-out of the park was designed by noted Landscape Architect/Engineer Charles W. Leavitt in 1901. The Ramble starts at 10:00 AM, 35 minutes prior to the 5K Race. This enables various members of the same family to cheer for each other even if they are participating in  different events.

This year, all pre-registered participants will receive a moisture wicking short sleeve t-shirt and a  “Goodie Bag.”

Distribution of the shirts,  and “Goodie bag” will only occur at registration and check-in at the day of the race. No other pickups are available.

Plentiful refreshments will be available after each event. 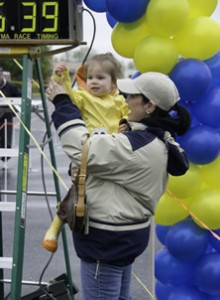 The 5K race is scored this year by Elite Racing Systems, whom will present results immediately following the conclusion of the race. Individual, age-group and team results are also available on the website the evening of the race. All events are held rain or shine.The official scoring is recorded by “Gun Time.” Net time is recorded as a convenience to the runners.

In the TEAMS category, the Fastest Team will earn first place awards in the 5K Female, Male and Mixed categories. Only the top five fastest times will be scored. Teams with more than five members – only the first five members of the team will be scored/timed for the Team score and eligible for an award.

No duplicate awards will be made, except in the Team and Montgomery Township/Rocky Hill Resident categories.

In keeping with the spirit of the day, every 1 Mile Ramble finisher will be presented with a special commemorative ribbon. All Ramble finishers can read their times on the computer printout available in the “Big Tent” following the event.

Run With Rotary On The Internet

RUN WITH ROTARY  dedicated Internet Website contains the complete course description and an application that can be downloaded. Participants can register on-line through a secure service, read the latest weather forecast for the area and find detailed driving directions. A registration confirmation page is also available, as well as the previous year’s race results, special sponsor information and links to other Web sites. Questions and comments about the Website or the race can be directed to the Race Committee.

CLICK HERE for a listing of all Sponsors and other supporters.

Skillman Park is an area of open space in the Skillman section of Montgomery Township which is owned by Somerset County and maintained by the Somerset County Parks Department.

.This 256 acre parcel, one of the largest parcels in the area, is located in the Skillman section of Montgomery Township, in the center of western Montgomery. It is north of Rt. 518, south of Skillman Road, east of Rt. 601, and west of Burnt Hill Road. Much of the property is field or woodland type open space. Rock Brook, its tributaries, and the former Sylvan Lake are surface water features of the property. The parcel is surrounded on two sides by the Selody Sod Farm and Hunter Farms. At the property’s center is the Village Elementary School, a public school on 12 acres. In addition, the Township has acquired from the State, and is upgrading for further use, an adjacent wastewater treatment facility on 7 acres located off Burnt Hill Road behind the State-owned Skillman Dairy Farm.

The property originally consisted of three large farms. These lands were purchased by the State of New Jersey for the establishment in 1898 of the “New Jersey State Village for Epileptics” at Skillman, during a time when there was no known treatment for epilepsy. The village lay-out was designed by noted Landscape Architect/Engineer Charles W. Leavitt in 1901.  For many years it operated as a self-contained “town” that consisted of hospitals, housing, farms, maintenance areas, schools, a theater, a power plant, a wastewater treatment facility, cemeteries, and an on-site landfill. It was one of the first such facilities in the United States

In the mid-twentieth century, with the discovery of medicines for treatment of epilepsy, the facility’s focus shifted and it became the New Jersey Neuropsychiatric Institute. Most recently, and until 1998, the property was known as “North Princeton Developmental Center” or NPDC, a New Jersey Department of Human Services’ residential psychiatric care facility.

In 2007 the Township of Montgomery purchased the now inactive facility/property and the adjoining wastewater treatment facility from the State of New Jersey. In acknowledgement of its unique early history, Montgomery Twp. referred to the property as “Skillman Village”, and took on all necessary remediation issues, while plans for mixed-use redevelopment were being formulated.

Until 2007 there remained over 100 State buildings on the property, mostly in substandard, unsafe, unsanitary, dilapidated and/or obsolescent condition. The property was essentially a brownsfield, from an environmental perspective. Ninety-two of these buildings were abated and demolished in the summer of 2007 by the Township of Montgomery. The few remaining buildings were boarded up while being considered for potential reuse. At the same time, efforts were undertaken to remediate environmental conditions at the site, restore Sylvan Lake, and repair its dam. All asbestos wrapped steampipes throughout the property, part of the original facilities’ heating system, were removed by fall 2008. While most of the environmental clean-up work was completed, some groundwater monitoring continues. The property must be thoroughly remediated and brought into compliance with applicable laws and regulations, ultimately resulting in issuance of a letter of “No Further Action” by the NJDEP.

The Township invited proposals from developers for ambitious redevelopment plans in 2009. Due to the economic downturn, none of the handful of short-listed developers were able to take on the project at that time. Township leadership determined that they should consider other uses for the property.

The Township and Somerset County worked on developing terms for the transfer of ownership of the property and plans for its reuse as a passive recreation use county park throughout 2010 and arrived at a final agreement in 2011. The remaining derelict buildings from the property’s days as North Princeton Developmental Center were remediated and removed in Summer 2011. The actual property closing transaction between Montgomery Township and Somerset County occurred on October 25, 2011. The purchase was for approximately $15.9 Million. This did not include the 7 acre wastewater treatment plant property or another 7 acres of subdivided parcels including the Pine Knolls and Maplewood houses, which remained. Unfortunately a fire destroyed Maplewood, the last remaining of the three farm houses, in the fall of 2011. Unsalvageable remnants were raized by the Township’s contractor in the summer of 2012. The Board of Education raized the last remaining NPDC brick building, the “Kay Building” on their property around the same time.

A Planning Committee began meeting in spring 2012 to work out the park development details for Skillman Park. This Committee includes three Montgomery residents and three County representatives. The County has begun a number of much needed tasks to upkeep the trees and grounds on-site. While that work and planning for parking and trails continues, the property remains closed to the public, with the exception of Main Boulevard a public road access to the Village Elementary School, a public Montgomery Twp. school located in the interior of the property.

(As taken from the Montgomery Township web site)

The founders of RUN WITH AIMEE conceived of this spring time race as a local charity event. The inaugural 1997 race drew 358 registrants for the 5K Run and the One Mile Ramble. The race, now called RUN WITH ROTARY, is now in its 19th year and its Committee strives to retain the race’s hometown appeal. By introducing a computerized finish line, an Internet web site, additional prize categories, on-line registration and “Team Competition”, the Rotary Club of Montgomery Rocky Hill has succeeded in increasing the event’s popularity. As a result, the number of participants has substantially increased since the race’s inauguration.